Contributed by Kris, the Record Breaker:

Here’s to managing our expectations in the new year!
I think the clear winner is item #3. 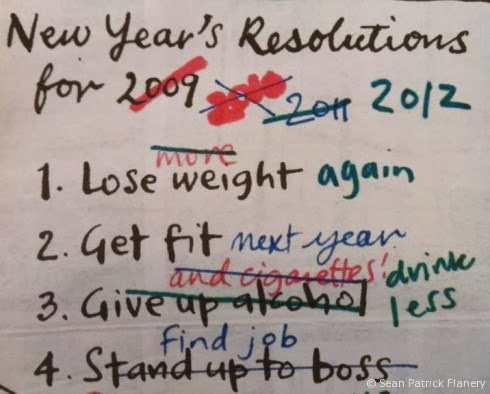 Posted by misslucyparker at 2:10 PM No comments:

It was in the moment we drunkenly crossed the road to pet a total stranger’s dog when I knew this Thanksgiving would be a doozy.  Ben, Emily, and I were waiting for the parade to roll, and we needed something to occupy our time.  We had already consumed all of the travel champagne (in this case defined as the large tumblers of mimosa that we carried in car cupholders), so it seemed entirely appropriate to pepper a random with questions about his Great Dane (maybe it was a Boxer mix… champagne, right).  It was a beautiful specimen of bigish (medium, definitely not small) dog at any rate.  The booze had put Emily in a good mood, and that was the whole point.  We wanted the first Thanksgiving with Ben’s sisters to be special.  Maybe we hedged our bet with 5 bottles of Korbel Brut, but we couldn’t just depend on our sparkling personalities to make the day memorable.  For years, Ben and I had tried to convince the girls to move home.  We’d tell our tales of New Orleans debauchery and Fred’s Debauchery and Banana debauchery, and through all of that was an implicit promise.  If they moved home, their lives would be more joyous, more rich, and apparently way more debaucherous.  We would see to that.  So we needed to deliver solid ratings in this first family get together.

Related Tangent: I think there are a few keys to make a gathering enjoyable.  First, you have to genuinely like the company of at least two people in attendance.  If you only enjoy one person, you’re probably going to smother her/him while also feeling a bit stifled with your lack of options.  If you have more than two, then mazel tov!  Second, you need the framework of an agenda, but not a regimented agenda.  You should plan on having dinner and watching a television show (sounds familiar, huh) but should not plan on dinner at 6:45  followed by four episodes of Girls.  Because what happens when the sauce burns and you and your friends are on your fifth glass of boxed wine when talk turns to Orange is the New Black?  Your schedule gets shot to hell, that’s what.  The point is that you provide a framework for the gathering to weave itself through and around, and then let cocktails and conversation take it where it wants to go.  Third, and I can’t stress this one enough, encourage cocktailing at any shindig.  I once attended a baby shower that had two types of sangria for refreshment, and it was a rousing success.  If you’re about to be a parent, you really need to schedule your wild oat sowing pronto.

Usually, we avoid small town parades unless we are riding on a hay covered trailer with a woman dressed like Elvis.  However, we made an exception when April and Morgan agreed to ride on a local restaurant’s float.  While we were waiting for the line of farm vehicles, antique cars, and duallys to pass us by, we traded Thanksgiving memories and laughed about nonsense.  Then we heard music, and the dancing began.  Dancing the Dougie with my sister-in-law isn’t something that I’m particularly proud of, but it definitely added some magic to the day.  And though I’m certain we scandalized the live nativity float with our pelvic thrusts, we created some hazy, champagne colored memories too.  Best of all, after we picked up all of the cheap candy and beads around the car, Ben drove Myrtle (his new Mazda Tribute) into the procession, and we followed it all the way to the end of the parade.  Naturally, we threw the candy and plastic necklaces to those along the route like the other legit floats.  It was magical.

After we picked up April and Morgan, we headed back to Emily’s place for more champagne and dinner.  The parade had put us all in a good mood, and family stories were being swapped while more mimosas were being poured.  Old school country music was playing in the background, and we danced in the living room from time to time.  Ben’s Pentecostal Aunt Lois joined us along with one of April’s Fort Polk friends.  We were a motley crew, and the conversations ranged from Momma Gooby hurling shoes and ashtrays at the Manuel kids when they wouldn’t sleep to military deployments in Iraq.  Eventually, the champagne ran out and the dancing ceased and the conversations tapered.  And we had done it.  We delivered the kind of good time that we had promised to the sisters all of those years. 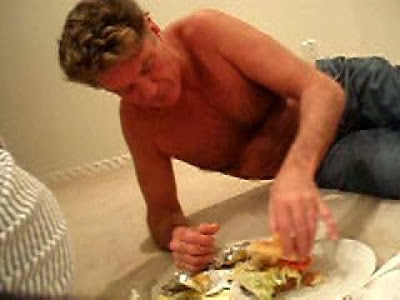 Posted by misslucyparker at 11:34 AM No comments: